There’s no one that goes on a cruise to sit around and watch TV, but sometimes it can be a great activity. After a day in the sun and humidity of the Caribbean, we’ll admit that we love nothing more than to chill out in a cool cabin, watching some television or Netflix.

We also know that we are not alone. That’s why we’ve rounded up the channel listings for two of the biggest cruise lines: Carnival and Royal Caribbean.

Below we have full details on the channel listings. One thing to keep in mind is that we’ve never seen the same channels twice on a cruise line. It seems to be that the offerings vary regularly and from ship to ship.

Therefore the channel listings below should give you an idea of what’s available, but could be different from what you see on your cruise.

What to Know About TV Channels on a Cruise

If you want the full run-down of what to expect from television on a cruise ship, then see our guide here. In general, however, you should set your expectations a little lower than what you might see on land.

Cruise ships typically have a couple of dozen channels, and most of those are related to the cruise itself. There are often channels for port shopping, a guide to what’s going on around the ship, safety channels and more.

Then there are typically channels that you won’t recognize showing everything from kids programming to movies. The number of well-known stations (e.g. ESPN, Travel Channel, Discovery, etc.) can usually be counted on one hand. Local broadcast channels such as ABC, CBS, or NBC aren’t available either.

To give you an idea of what to expect, here are the channel listings from a recent cruise for two major cruise lines: Carnival and Royal Caribbean.

Note: TV lineups seem to change slightly every time you sail. The channels available and the order may vary for your cruise.

You can see that there aren’t a ton of channels on Carnival — just about two dozen. In fact, many of the biggest cable channels aren’t available at all, like ESPN. Don’t worry though, if there is a big game you want to watch, it will be shown somewhere on the ship — most likely the SKYBOX Sports Bar that’s on many ships or the casino.

As for the rest of the stations, you have things like Nickelodeon for the kids, Discovery, Travel Channel, and some additional cable channels. Much of the rest is a ton of cruise line-specific stations. Also, the channels start at 11 instead of 2, like you would see on land. Notably absent are any networks like ABC or NBC.

Here are all of Carnival’s TV channels from a recent cruise: 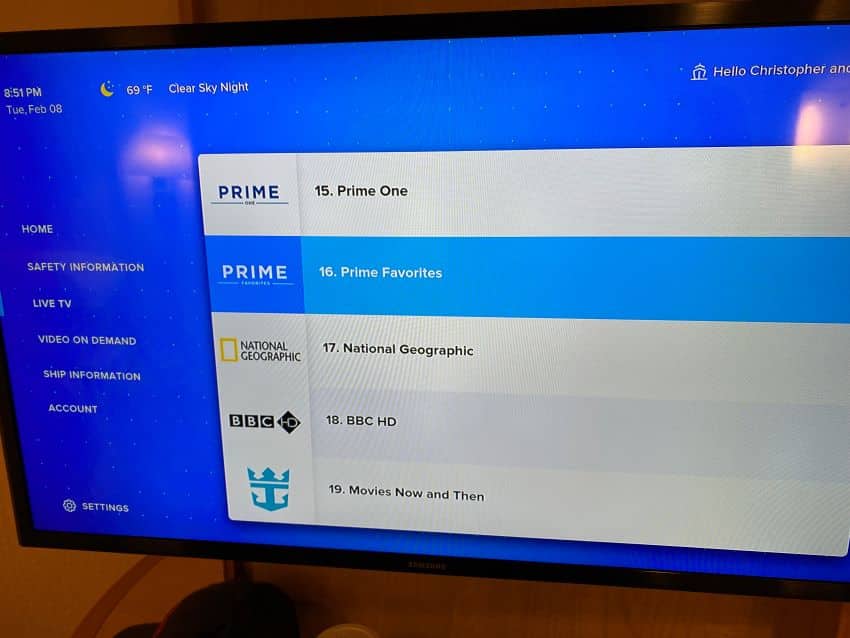 The TV channel lineup on Royal Caribbean is similar to Carnival in that the list is relatively short, along with a number of stations you won’t find anywhere and/or are related to the cruise.

One thing to note is that we find Royal Caribbean to offer more sports programming such as ESPN compared to Carnival. As well, it seems that during football season more games are fed into the cabin TV, allowing you to watch while at sea.

Note: We’ve noticed that channel listings change often on Royal Caribbean. We have been on cruises where ESPN, ESPN 2, ESPN U, and SEC Network are all available, while they aren’t available on others. 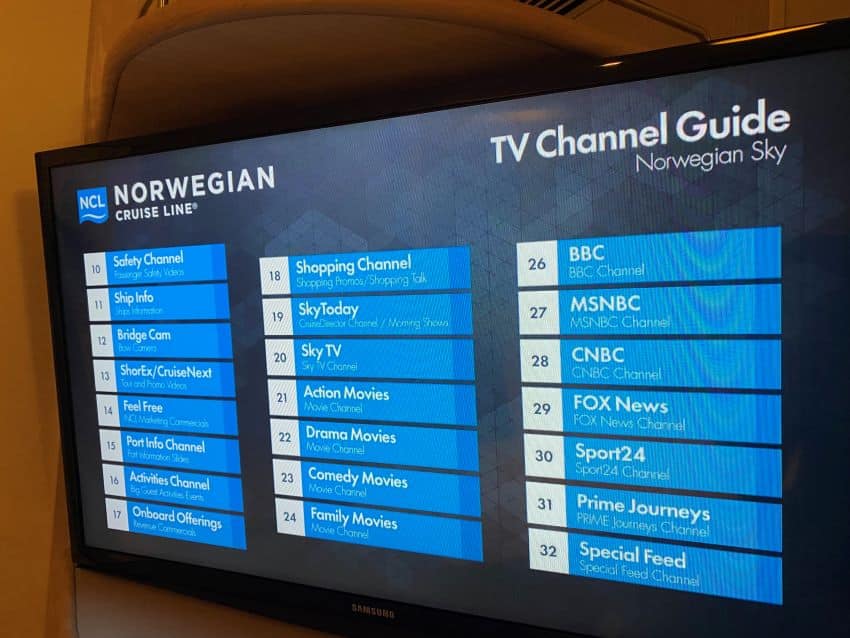 Like its rivals Royal Caribbean and Carnival, NCL has a lineup that’s a bit different than what you’d see on land.

As you can see, most channels are content for the cruise line and the ship. Meanwhile, MSNBC, Fox News, and CNBC are the only widely-known U.S. cable channels in the lineup.

Bottom Line on TV on a Cruise

While no one goes on a cruise specifically for TV, you should still know that if you do want to relax and watch some of the tube, the options are somewhat limited.

Given the lack of channels, we suggest bringing your own device to allow you to watch any movies or TV. Most shops offer streaming if you get the premium Internet package. As well, Netflix and other services allow you to download shows beforehand to watch without a connection.

Popular: 39 Useful Things to Pack (17 You Wouldn’t Think Of)

Read Next: Park & Cruise Hotels for Every Port in America

Locations To Go to In California